The Greatest Crash Of Your Life Is Just Ahead

Harry Dent, best-selling author and economist, has warned that the stock bubble in the U.S. today is the biggest in history and that the “greatest crash of your life is just ahead…”


The story on Wall Street and CNBC continues to be that we’re in a correction and this is a buying opportunity. Even Warren Buffett joins the chorus of stock market cheerleaders for the skeptical public. Well, I agree with the skeptical public, not the experts here!

The bull market from early 2009 into May 2015 looks just like every bubble in history, and I’m getting one sign after the next that we did indeed peak last May.

I’ve been telling our Boom & Bust subscribers for months now that the dominant pattern in the stock is the “rounded top” pattern I show in the chart below: 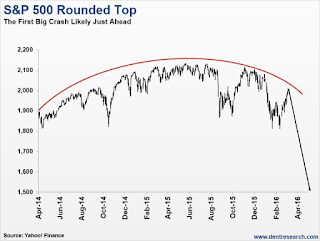 After trading in a steep, bubble-like channel from late 2011 into late 2014, with only 10% maximum volatility top to bottom, the market finally lost its momentum… just as the Fed finished tapering its QE. That’s because the Fed was the primary driver in this stock bubble in the first place!

But the first sign that the bubble had indeed peaked was the break of that upward channel last August. Surprise, surprise! Without the Fed’s stimulus, stocks started to sputter out!

With that sign we can point to what now looks like a series of major tops, in one major index after the next, since late 2014.

The Shanghai Index crashed 45% in 2.5 months, similar to the Dow in late 1929 on its first 2.5 month wave down. That one was so obvious that when I said it was about to burst, it peaked that day and rolled over the next!


Dent is a successful newsletter writer and has written numerous best selling books over the years, most recently ‘Spending Waves: The Scientific Key To Predicting Market Behavior for the Next 20 Years’ and ‘The Demographic Cliff – How to Survive and Prosper During the Great Deflation of 2014–2019? – detailing why we’re facing a “great deflation” after five years of stimulus — and what to do about it now.

With stock market valuations in the U.S. in particular looking stretched and U.S. stocks looking very overvalued, we agree with Dent that there is indeed a real risk of a material correction in stock markets as there was in 2000 and in 2007. In presentations to clients we have looked at and explained why we view these markets as over valued and having all the hallmarks of bubbles about to burst.
Given the risk of a new global financial crisis and the backdrop of a massively leveraged global financial system which has seen debt increase another $57 trillion in just 8 years, it would be foolhardy to dismiss Dent’s bearish prediction. Most economists, brokers, advisers and politicians would be likely to do – as they did regarding warnings we made in the 2005 to 2008 period, prior to the first global financial crisis.

Ultimately, none of us have a crystal ball and it is best to focus on what we control and always follow the three rules of investing:

Portfolios with very overweight allocations to equities and bonds are now at risk and there is a strong case for increasing allocations to cash and gold. Careful consideration should be given to who you deposit your money with and store your gold with. Counter party risk and the return of capital rather than the return on capital will assume importance once again in the coming years.

It is worth pointing out that while Harry Dent believes gold prices will fall initially in the coming deflationary spiral – perhaps as low as $700 per ounce – he clearly advises having an allocation to gold as a form of financial insurance:


“Investors might want to keep a little ‘insurance’ gold for diversification.”


Gold prices may indeed fall in the short term however as was the case in the near financial and economic deflationary collapse in 2008, we believe that gold will outperform other assets and should rise in value in the medium term and taking a view on an annual or multi year basis.

Dent’s view that gold will fall to $700 per ounce appears to be based primarily on technical analysis. It ignores the important global supply and demand fundamentals in the international gold market. The above ground, refined, investment grade, physical gold market remains a very small market vis a vis stock, bond, property, cash and derivative markets. Even a small amount of extra demand for physical bullion internationally, given the lack of extra supply should support and indeed lead to higher prices.

To consider gold prices without considering the supply, demand factors driving the market and in particular the very significant demand from China, India and globally and indeed the central bank demand of today is quiet simplistic and liable to lead to erroneous conclusions regarding future prices.

As ever with insurance, it is important to focus on the value derived by the owner rather than solely speculations regarding the price. When buying insurance – whether that be car, health, house or the financial insurance that is gold it is also important to consider the risk of not having insurance and how much it may cost not to be insured.

Real diversification and an allocation to the insurance that is physical gold remains the key to weathering the second global financial crisis.
張貼者： Lisa 於 下午1:01