With most key markets around the world trading lower, today Egon von Greyerz warned King World News that there are enormous shortages of physical gold and this has created a situation where the bullion banks are in real trouble here because of the supply problems.  Below is what Greyerz, who is founder of Matterhorn Asset Management out of Switzerland, had to say in this powerful and exclusive interview.

Greyerz:  “Eric, you know my view that gold and silver will go up because of unlimited money printing.  That’s guaranteed to happen.  But other factors that could put even more (upward) pressure on gold in the short-term are the enormous physical shortages....


“Governments and central banks have, for decades, leased or sold their gold to the bullion banks.  So they are very likely to own very little of the 23,000 tons that Western central banks are said to hold.

But now bullion banks also have a problem:  They tried to replenish their (physical gold) coffers during the massive manipulative selling that we’ve seen over the last few months in the paper market.  Although they took the price down, most of the physical (gold) that was released by selling from ETFs and hedge funds was absorbed by Asia.

It’s important for investors to understand, and especially holders of gold and silver, that there are now several different factors which will propel gold and silver to much higher levels.  As you know, Eric, I’ve said that within the next year we will see levels that will be a lot higher than the $1,900 mark we saw in 2011.

I see shortages everywhere, and I see real problems in the market with the bullion banks still under pressure.  I am hearing that they (bullion banks) are under real pressure, and this is why we will see incredible upward moves (for gold and silver) starting in September.”
張貼者： Lisa 於 晚上8:56 3 則留言:

The first window we warned where a low in gold could form was June in the mid 1100 level. We reached that minimum target objective despite all the yelling and screaming about fiat, manipulations, and other nonsense. We are still not out of the woods on gold yet and the primary resistance zone going into year-end remains 1307-1432. The first Weekly Bullish Reversal is 1424 and the first Monthly is 1569.
The Daily Bearish are 12725, 12693, and 12068.

After September, we will do an update for those who bought the metals report.
張貼者： Lisa 於 下午5:40 沒有留言:

Morgan discusses the historic beating the cartel has inflicted on the metals over the past 3 months, and states with silver recently touching an $18 handle, the evidence indicates that JP Morgan is now LONG SILVER! 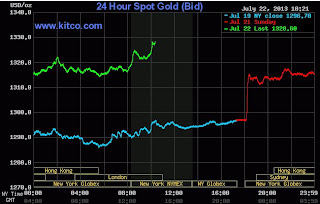 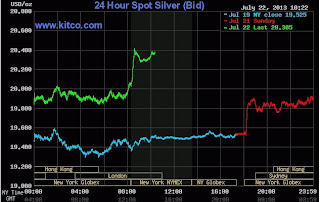