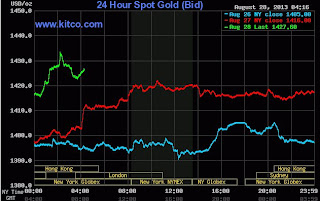 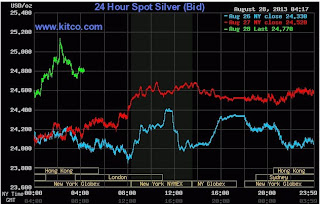 On the heels of gold and silver surging strongly, today Egon von Greyerz sent King World News a tremendous piece where he discusses today’s move, what investors should expect in the future, as well as some surprising medium-term and long-term price projections for both gold and silver.  Below is what Greyerz, who is founder of Matterhorn Asset Management out of Switzerland, wrote in this fascinating KWN exclusive piece.

With only 1% of world financial assets invested in gold, very few so-called investment experts have any understanding of the yellow metal.  So during the 22-month correction in the gold price, most of the 99% who don’t own gold have all been calling for the end of the bull market....


What most of these people don’t understand is that gold is not in a bull market.  It is paper money going down, rather than gold going up.  For 5,000 years gold has been the only money which has maintained its purchasing power.  Every single currency has been destroyed throughout history, in a permanent bear market.  Voltaire was so right when he said in 1729 that “paper money eventually returns to its intrinsic value – ZERO.”

We have just started the acceleration phase of the upmove in gold (and silver).  Gold is up $20 today, to almost $1,400 and silver up $0.65 to $23.75.  But this is just the first phase of a continued collapse of paper money until most currencies reach ZERO.  It is not likely to take that many years.

So gold and silver will continue to be the mirror image of falling currencies by very quickly reaching new highs.  In the next 12-15 months, gold could reach $2,500 and silver $70.  But that is still only the beginning, and we should reach my very longstanding forecast of in excess of $10,000 for gold and $500 for silver.  And those targets are with “normal inflation.”  With hyperinflation, which I expect, we might have to add a few zeroes to the targets.

With so many superb “freethinkers” that Eric King interviews, KWN followers have been forewarned about these events.  As I discuss with Eric in this weekend’s audio interview, QE will not end in the US.  The world is still in a total mess economically and financially and none of the problems that almost caused a collapse in 2008 have been resolved.

For a very long time we have seen manipulation by governments in the precious metals markets.  The manipulation we saw earlier this year was absolutely extraordinary.  This was extremely well covered by KWN in interviews with Andrew Maguire and others.   Manipulations of markets can last a long time, but eventually they will end.  The truth always wins in the long run and the laws of supply and demand come into effect again.

The smashing of gold and silver in the paper market has, in my view, come to an end.  The physical market will now take over as the only true market.  Paper longs will take delivery and paper shorts will panic.  This will not happen overnight, but gradually, over time.  There will be periods with very high volatility, with gold going up hundreds of dollars in one day and silver tens of dollars a day.  But corrections will also be violent, so investors must be careful.

So we now have a perfect synthesis of fundamental, physical and technical factors for gold and silver, which will be the beginning of a long and spectacular rise.  But investors must remember that they should only own physical metals which must be stored in vaults outside the banking system.
張貼者： Lisa 於 下午1:28 4 則留言:

The biggest gold story no one is talking about

It’s one of the world’s biggest stories right now and it could dramatically affect the price of gold. But, Americans have heard only a little about it.
The decline in India’s currency, the rupee, is nothing short of stunning. Currently at record lows, the rupee has dropped nearly 18% since May. It now takes 63.25 Indian rupees to buy one US dollar.
(Read: For Indians living abroad, rupee's plunge is great news)
Causing the plunge is – who else? – Ben Bernanke. Here’s why:
Back on May 22, the Federal Reserve Bank Chairman spoke before the US Congress and hinted that the Fed could start tapering its $85 billion per month bond buying program. That policy, known as “quantitative easing”, helped keep bond prices up and, thus, interest rates down to near-record lows.
Though the program still continues, the markets have been worried all summer that it soon won’t have a giant buyer paying up for bonds. In response, bondholders have been selling their bond positions. Lower bond prices mean higher yields on the bonds. Since the start of May, yields on the US Treasury’s 10-year note have gone from 1.63% to 2.82%.
That jump may not seem like much but if something is giving you 75% more return than it used to just a few months ago, you’d at least give it a second look. And, that’s what’s happening worldwide. Global investors are finding US assets a little more attractive than before and they’re selling other currencies to buy dollars so they can get in on those assets.
India wasn’t the only Asian country particularly hard-hit by higher US interest rates. Another was Japan. Since May, the yen is down 23%. But while Japan’s $6 trillion economy dwarves India’s $1.8 trillion, India has a special distinction in one market: India is the world’s largest buyer of gold. And, fear of further weakening in the rupee has made gold a safe haven for some in India.
(Read: First India, then Indonesia... who is next?)
According to statistics published by the World Gold Council, India demanded 1,048.5 tons of gold over the last twelve months. That represents 28.7% of the world’s demand of 3,649.7 tons and a 29% increase in total tons demanded by India compared to the previous twelve months.
Indian consumers are increasingly turning to gold to hedge their devaluing currency. That has the Reserve Bank of India nervous about capital leaving the country and it led the country to curb imports. Last week, the country raised import duties to 10% on gold and banned the importing of gold coins and medallions.
(Read: India's efforts to curb gold imports)
So, with this as a backdrop, what does it all mean for gold?

We ask Talking Numbers contributor Enis Taner, Global Macro Editor at RiskReversal.com, to look at the fundamentals of gold. Fellow contributor Richard Ross, Global Technical Strategist at Auerbach Grayson, looks at a chart of gold as priced in Indian rupees to show what the technicals are saying about the future of both.
張貼者： Lisa 於 下午1:01 沒有留言:

Foreigners Sell More US Securities Than After Lehman Bankruptcy

While Americans were blissfully BTFD in June, and enjoying the media propaganda that "all is well" and the beard has their back (he does, but not in the conventionally accepted way) foreigners were selling. Did we say selling? Pardon, we meant dumping with a vengeance, throwing out the boatload with the bathwater, with both hands and feet and getting to da choppa.

As the just released TIC data report indicates, in June foreigners, both private and official, were hitting every bid they could find. Literally. For the first month ever, every single security class was sold off: Corporate stocks: sold - $26.8 billion; Corporate Bonds - sold $5.0 billion; Agencies: - sold $5.2 billion, and, perhaps the culprit of it all, Treasuries, saw the biggest dump ever, as foreigners sold an epic $40.8 billion! Adding across the various asset classes, the consolidated foreign sale in June 2013 was worse than Lehman and the month after it.

Somehow to foreigners, Bernanke's Taper Tantrum was a more shocking event than the biggest bankrtupcy filing in history (one which launched the global central bank scramble to buy up everything that is not nailed down).

Still think it's priced in? If just the speculation that Bernanke he may taper launched the biggest US security dump by the rest of the world in history, what happens when speculation becomes fact?

Well, we will wait and see !

The diehard bulls are already proclaiming the low is in place so buy – buy – buy. Gold should press higher into next week, but the Weekly Bullish Reversal stands at 1423 and the year-end resistance will be 1435. The big turning point is still next January. So we are about $100 below major resistance. This diehard bullishness swearing every time this is it, is perhaps what has to break before we get the real bull market. Gold never got through the 1980 high adjusted for inflation $2300. It has been the worst performing asset with equity and, real estate advancing far more. The Dow stood at 1,000 in 1980 when gold was $875. The Dow has come close to 16,000 and gold could not break $2,000. It is all about time. You cannot have gold blasting up and everything else is not in line. But again, these people only look at gold and ignore the rest of the markets.

The time will be right. But patience is necessary. The problem with the Goldbugs is they are just always bullish and by constantly talking the same game no matter what, real unbiased investors get turned-off. This damages the credibility of the metals and makes a lot of people look at them as a joke rather than an asset class. It would be if a stock broker constantly said buy – buy – buy, even when the Dow declines.
張貼者： Lisa 於 下午3:39 沒有留言: 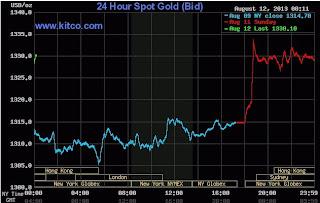 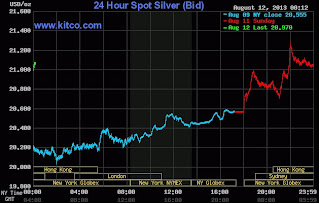 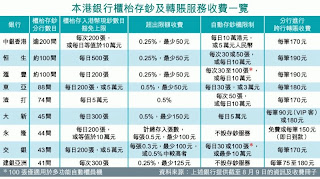 "Hello Scotia Mocatta, This Is JPMorgan - We Urgently Need Some Of Your Gold"

As ZH reported previously, following the announcement of an imminent withdrawal of 63.5k ounces of its gold (16% of the total), JPM's vault operations team promptly called around and to its disappointment was only able to procure a tiny 6.4k ounces: not nearly enough to preserve the impression that it is well-stocked. We then said, "None of which changes the fact that in a few days, the inventory in JPM's gold vault will drop to another record low of only 380K ounces and the JPM "rescue" pleas from HSBC and other Comex members will become ever louder and more desperate until one day they may just go straight to voicemail."
Today, as we predicted, the calls into HSBC indeed appear to have gone straight to voicemail (perhaps HSBC did not have any more unencumbered gold to share, perhaps it just didn't want to) which left JPM with just one option: go down the list.
Sure enough, as the just released Comex update shows, JPM was forced to receive a "completely unsolicited" handout of some 20.2K ounces from Scotia Mocatta, the vault best known for being situated under 4 WTC during September 11 (and whose current physical vault can be found conveniently within spitting distance of JFK airport).
However, what is notable today unlike yesterday, is that JPM's pleas seem to be getting more shrill: while yesterday HSBC released eligible inventory, today Scotia was forced to hand over registered gold straight into JPM's eligible pile: this is perhaps the first time we have seen this happen laterally between two vaults, without an intermediate warrant detachment step. Furthermore, with HSBC moving 43.4K oz from Registered to Eligible, we would expect either another major Comex withdrawal in the next few days from HSBC, or this is merely HSBC making room for further gold "requests" by JPM.
Either way, assuming that first the HSBC transfer, and now the Scotia Mocatta gold delivery, aren't entirely unsolicited, how long until someone inquires just why it is that the biggest bank by assets is forced to run around town and beg for whatever gold it can get its hands on?

***
And for those who missed it, here is yesterday's lateral gold move from HSBC to JPM: